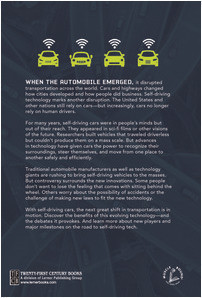 Self-driving cars mark the next great shift in mass transportation. Learn about early attempts at self-driving technology, the benefits of driverless cars, controversies surrounding the new technology, innovations that make self-driving cars possible, and the industry’s major players. This emerging “disruptive” technology has its roots in the work of engineers and futurists dating back decades. Author Michael Fallon traces how the software and hardware for self-driving vehicles developed through the years, including major milestones, notable misfires, and efforts from the public and private sectors. He also spotlights recent breakthroughs that have made self-driving vehicles viable on a mass scale, along with the public debate that these breakthroughs have created.

“The author clearly advocates that it is only a matter of time before autonomous cars hit the road for good . . .”—Booklist

“Even those who are not tech enthusiasts will find something of interest to learn and contemplate.”—School Library Journal

Michael Fallon is a writer of books, magazine articles, and essays on all sorts of subjects—art and failing artists, Southern California, science and technology, baseball and sports, music, food, American social and cultural history, childhood and fatherhood, and much more. He lives in Minnesota.