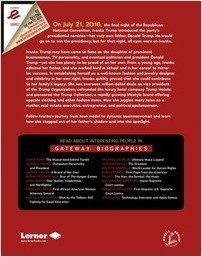 A Brand of Her Own

Ivanka Trump may have come to fame as the daughter of prominent businessman, TV personality, and President Donald Trump—but she has plenty to be proud of on her own. In establishing herself as a well-known fashion and jewelry designer, Ivanka quickly proved that she could contribute to her family’s legacy. She has overseen million-dollar deals, cofounded the luxury hotel company Trump Hotels, and pioneered a rapidly growing lifestyle brand. Now she juggles many roles as a mother, real estate executive, entrepreneur, and political spokesperson. Follow Ivanka’s journey from teen model to dynamic businesswoman and learn how she stepped out of her father’s shadow and into the spotlight.