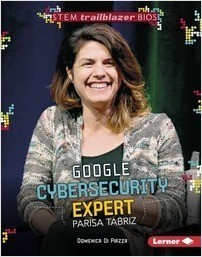 Do you like to compete against other people? So did cybersecurity engineer Parisa Tabriz. She turned her toughness and her competitive spirit into a job as Google’s top security expert.

As a child, Tabriz loved to play games with her brothers—and she played to win. When she couldn’t outmuscle them, she tried to outsmart them. In high school, she excelled at math and science. She also liked drawing and painting. She considered a career as an artist and even as a police officer. Years later, Tabriz became an information security engineer at Google. How did she go from battling her brothers to fighting cybercriminals at one of the world’s most important tech companies? Read on to learn all about the life of Google’s top security brain.