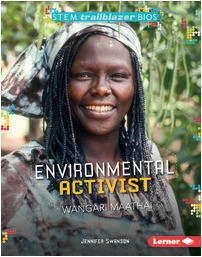 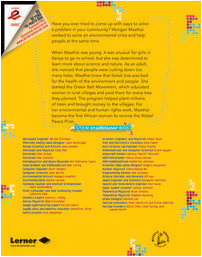 Have you ever tried to come up with ways to solve a problem in your community? Wangari Maathai worked to solve an environmental crisis and help people at the same time.

When Maathai was young, it was unusual for girls in Kenya to go to school, but she was determined to learn more about science and nature. As an adult, she noticed that people were cutting down too many trees. Maathai knew that forest loss was bad for the health of the environment and people. She started the Green Belt Movement, which educated women in rural villages and paid them for every tree they planted. The program helped plant millions of trees and brought money to the villages. For her environmental and human rights work, Maathai became the first African woman to receive the Nobel Peace Prize.

Jennifer Swanson began her writing career at the age of five when she wrote and illustrated books for her kindergarten class. A self-professed science geek, Jennifer started a science club in her garage at the age of 7. She used to gather leaves and flowers and look at them under a microscope. Much to her mother's dismay, her prize possession was a cow skull that she found in a field down by the river. Her love of science continues to this day as when she is not writing, she loves to go out and notice the science all around her. Jennifer lives in Jacksonville with her husband and two dogs. Learn more about Jennifer at her website: www.JenniferSwansonBooks.com