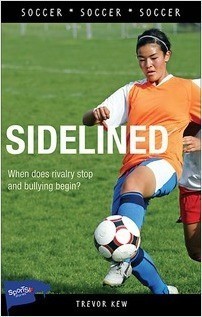 For Vicky Parker, life has never been better. Despite mom’s new boyfriend (ew!), Vicky and best friends Parm and Marjan seem to be shoo-ins for the soccer team and the chance to play in the tournament— in England! But friendships turn into rivalries as the pressures of tryouts get to be too much, and a charming grade twelve boy takes an interest in Vicky instead of Marjan. How far are the girls willing to go when the competition heats up? And is a trip (and a boy) worth the sacrifice of a teammate and a best friend?

Trevor Kew is an English teacher in Japan and regular contributor to the soccer magazine Free Kick. He is also the author of several Lorimer Sports Stories novels, including Bench Brawl, Trading Goals, and Playing Favourites.