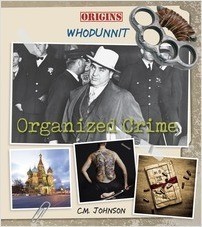 From the Series Origins: Whodunnit

The crime organizations most often portrayed in movies and on television are interesting, but they’ve got nothing on the real world of organized crime. Who really controls certain parts of Russia? Could it be the Red Mafia? A group called the Triads, of China, is one of the most feared organized crime groups in the world. In Organized Crime, part of Full Tilt’s Origins: Whodunnit series, students will learn about the impact of organized crime on society and will explore how and why different criminal organizations began.

C. M. Johnson grew up in Lake of the Woods County, Minnesota, and has written literary biographies of Jane Johnston Schoolcraft and Tess Gallagher for the American Writers Supplement. She lives in Minneapolis.