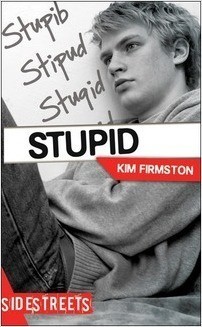 Martin’s been diagnosed with ADHD, but he feels something about his diagnosis isn’t right. The Ritalin he’s prescribed doesn’t seem to make a difference. When Martin’s grades continue to sink no matter how hard he tries, his father writes him off as lazy and just plain stupid. His dad is convinced that Martin just needs to focus more on his studies and less on making movies.

One night while out pursuing his passion on the city streets with his camera, Martin meets Stick and is introduced to the energetic and exciting pastime of parkour—free-running. While filming Stick’s flips and tricks, Martin begins to see a connection between how his brain interprets the world, all jumbled and fast-moving and out of order, and what the free-runners see. Camera in hand, Martin sets out to make a video that will show his dad what he sees, and hopefully get him to understand that Martin’s real learning disability, dyslexia, has never been properly diagnosed.

Kim Firmston is the author of the SideStreets novels Stupid, Schizo, Hook Up, and Touch. Her books have been named Resource Links Year's Best and Best Books selections.