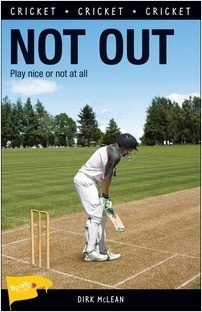 Since Dexter’s parents’ death, he’s been living with his aunt in her Scarborough apartment. Even though it’s been two years, Dexter is still struggling to control his anger and so far the best way for him to do this is through sports. Then one day he snaps and attacks the pitcher during a baseball game, and Dex suddenly finds himself off the team. His aunt gives him two options: find another sports team, or go back to trombone lessons. But no other coach seems willing to give Dexter and his now-legendary temper a chance . . .

Dexter’s best friend, Atul, suggests that he try out for the school’s cricket squad, but Dexter’s not so sure. Despite his Caribbean heritage, he knows almost nothing about cricket, and thinks it’s a wimpy sport anyway. But Dex’s batting skills make him a shoo-in, and to his surprise, he even starts to enjoy himself—until the squad captain, jealous of Dex’s natural skill, makes his life even more difficult than before.

Dirk McLean is the author of children's picture books and novels for young adults. Dirk was born in Trinidad, but now lives in Toronto.