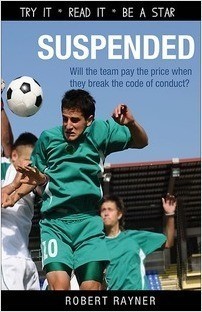 Shay and his pal Toby are among the players on the school soccer team who fall foul of the “fair play contract” introduced by the new school administration. After being banned from playing on behalf of the school for the rest of the season, the dismissed players form their own unofficial team—and become one of the top teams in the league. But will they be allowed to play in the championship game? Based on a true incident, Suspended is a story about determination and true sportsmanship.

Robert Rayner lives in New Brunswick. His books have been nominated for the Ann Connor Brimer Award and the Hackmatack Award and have also been named Canadian Children's Book Centre Our Choice selections.