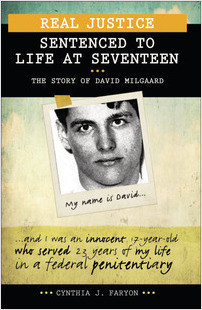 The story of David Milgaard

David Milgaard was a troubled kid, and he got into lots of trouble. Unfortunately, that made it easy for the Saskatoon police to brand him as a murderer. At seventeen, David Milgaard was arrested, jailed, and convicted for the rape and murder of a young nursing assistant, Gail Miller. He was sent to adult prison for life.

Throughout his twenty-three years in prison, David maintained that he was innocent and refused to admit to the crime, even though it meant he was never granted parole. Finally, through the incredible determination of his mother and new lawyers who believed in him, David was released and proven not guilty. Astonishingly, in hindsight the real murderer was obvious from the start.

This is the true story of how bad decisions, tunnel vision, poor representation, and outright lying and coercion by those within the justice system caused a tragic miscarriage of justice. It also shows that wrongs can be righted and amends made.

Cynthia J. Faryon is the author of eleven books, including Real Justice: Sentenced to Life at Seventeen - The story of David Milgaard. She lives in Richer, Manitoba.