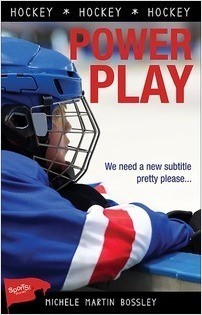 When Zach Thomas broke his wrist going into the boards early in the hockey season, he thought he was done for the year. But as his Cochrane, Alberta, Pee Wee team gets ready for the play-offs, his doctor tells him he’s healed-up enough to pay. Zach isn’t so sure.

His fear of being checked hard in the corner makes him very reluctant to head back out on the ice. To make matters worse, a tough guy on an opposing team claims he has unfinished business with Zach. When he gets to talk with an NHL pro, however, Zach learns from experience how to stand up to his fears—and to the bully.

Michele Martin Bossley is the author of numerous children's books. Many of her novels have been Canadian Children's Centre Our Choice selections, including Goon Squad, The Winning Edge, and Trapped.