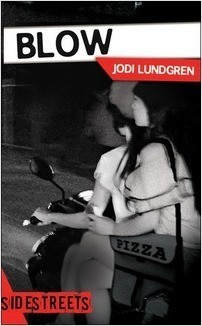 As far as Mary, a.k.a. Meringue, can tell, the only good thing about moving from Vancouver to Red Deer following her parents’ divorce is that she was able to get a head-start on earning her Learner’s Permit. Now she’s sixteen, she can drive on her own. When her friend Jeff asks her to cover his pizza route, Meringue jumps at the chance to cruise around town on her mother’s scooter. Little does she know that Jeff has been using his father’s pizza shop as a cover-up for his small-scale drug deals. By the time Meringue figures out what’s going on, a bigger drug dealer is moving in on Jeff’s business—and on her. Meringue is scared. How can she get herself out without snitching?

Jodi Lundgren has backpacked trails around the world. She teaches English and Creative Writing at Camosun College. She is the author of the SideStreets novel Blow.