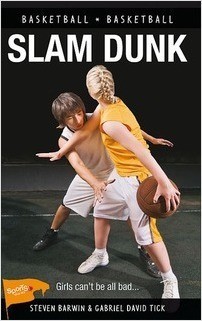 Mason’s basketball team, the Cabbagetown Raptors, is going co-ed after seven successful seasons. He’s pretty open-minded about the change, especially after he meets Cindy, a really top-notch player. The other guys aren’t so sure.

Before long everyone has taken sides, and the Raptors’ chances of making the national finals seem to fade into oblivion. When Mason’s growing friendship with Cindy goes sour, however, he takes it upon himself to make things better, both with Cindy and the team.

Gabriel David Tick is a television writer. With Steven Barwin, they have written for such shows as John Woo's television series Once a Thief, The Royal Canadian Air Farce, and Street Cents.

Steven Barwin is a middle school teacher and the author of seven books in the Lorimer Sports Stories series, including Spiked, named one of Resource Links Year's Best. He lives in Toronto.