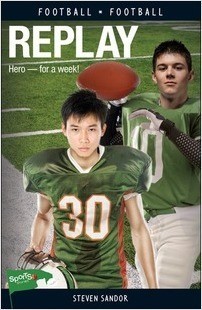 Growing up above his parents’ Chinese family restaurant in Sexsmith, Alberta, Warren Chen has always dreamed of being a football star. At 90 pounds and five feet tall, he’s not exactly built like a linebacker, but even short kids from tiny towns have big dreams. At first the coach is reluctant to even let him try out, but soon he sees Warren’s strengths—he is small, slippery, and no one can catch him. Warren is named the team’s new running back.

In their first game of the season, the Sexsmith Shamrocks face their biggest rivals, Grande Prairie. In a breathtaking dash along the sideline, Warren reaches the end zone to score the game-winning touchdown—almost. But Warren celebrates anyway, and the referee buys it. Sexsmith’s losing streak is broken, and Warren has proven himself worthy to be on the team, a genuine football star! But he knows it’s not quite the truth, and sooner or later, someone will find out. Warren has to decide whether to come clean and cost his school the victory, or continue living the small town football dream.

Steven Sandor is an award-winning magazine editor, author and sports broadcaster. He has written five books in the Lorimer Sports Stories series, and two teen novels.