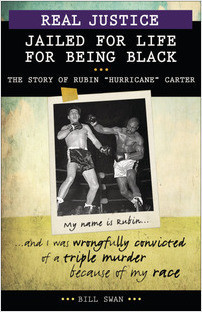 Real Justice: Jailed for Life for Being Black

The Story of Rubin "Hurricane" Carter

Rubin Carter was in and out of reformatories and prisons from the age of twelve. At twenty-four, he became a winning professional boxer and was turning his life around. But Carter was also very vocal about racism in the local New Jersey police force. In 1966, local policemen arrested Carter and a friend for a triple murder. The two were convicted and sent to jail for life. Carter spent nearly twenty years in jail, proclaiming his innocence.

A teen from Brooklyn, Lesra Martin, heard Carter’s story and believed he was innocent. He and a small group of Canadians contacted Carter and began working with Carter’s lawyers in New York to get the boxer exonerated. In 1985, a judge released Carter, ruling that Carter’s conviction had been based not on evidence, but on racism.

Carter moved to Canada in 1985, where until his death in 2014 he worked helping others prove that they had been wrongfully convicted.