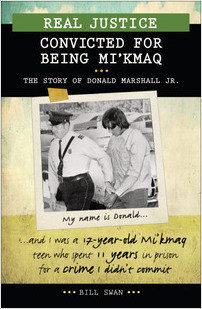 Real Justice: Convicted for Being Mi'kmaq

The Story of Donald Marshall Jr.

When a black teen was murdered in a Sydney, Cape Breton park late one night, his young companion, Donald Marshall Jr., became a prime suspect. Sydney police coached two teens to testify against Donald which helped convict him of a murder he did not commit. He spent 11 years in prison until he finally got a lucky break. Not only was he eventually acquitted of the crime, but a royal commission inquiry into his wrongful conviction found that a non-aboriginal youth would not have been convicted in the first place. Donald became a First Nations activist and later won a landmark court case in favor of native fishing rights. He was often referred to as the “reluctant hero” of the Mi’kmaq community.