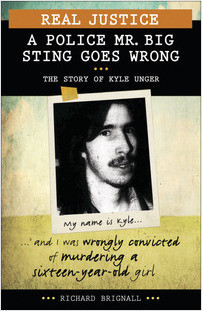 The Story of Kyle Unger

On the night of June 23, 1990, teenage friends Kyle Unger and John Beckett made a last-minute decision to attend a music festival near Roseisle, Manitoba. They were loners, not the popular kids at school. But on this night they seemed to finally fit in. They had fun, played games, drank, and hung around bonfires with other people. The next morning, a sixteen-year-old girl was dead. By the next week, Kyle was charged with her murder. Due to insufficient evidence he was let go, but the Mounties were convinced he was the killer.

They laid a trap, called the Mr. Big operation, for Kyle. With offers of money, friends, and a new criminal lifestyle, the RCMP got Kyle to confess to the murder. But the confession was false—he had not been the killer. He was convicted and sent to prison.

For the next twenty years Kyle fought for his freedom. He was finally acquitted in 2009.

This book tells the story of an impressionable but innocent teenager who was wrongfully convicted based on the controversial Mr. Big police tactic.

Richard Brignall has written many non-fiction books for young readers and adults, and contributed hundreds of articles to several magazines. His books have been shortlisted for numerous awards.