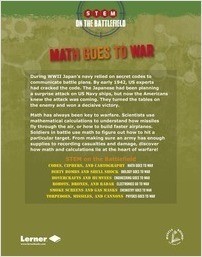 During WWII, Japan’s navy relied on secret codes to communicate battle plans. By early 1942, US experts had cracked the code. The Japanese had planned a surprise attack on US Navy ships, but now the Americans knew the attack was coming. They turned the tables on the enemy and won a decisive victory.

Math has always been key to warfare. Scientists use mathematical calculations to understand how missiles fly, or how to build faster airplanes. Soldiers in battle use math to figure out how to hit a particular target. From making sure an army has enough supplies to recording casualties and damage, discover how math and calculations lie at the heart of warfare!

“[A] well-designed, action-packed entry in the STEM on the Battlefield series . . .”—Booklist