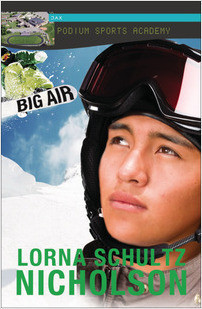 Aboriginal snowboarder Jax has it made. He’s in his last year at Podium Sports Academy and he’s got a sponsorship from a big snowboarding company in the bag. But then his older brother, always the troublemaker in the family, shows up in Calgary unexpectedly. Suddenly Jax’s sponsorship is threatened when the police come asking questions about a break-in at the house where he lives. He wants to help his brother, but will it cost him his future as a professional boarder?

Lorna Schultz Nicholson has written, produced, and hosted programs for television and radio, and is well known for her print journalism. She is now a full-time author who works from her home in Edmonton, Alberta.