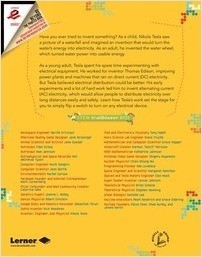 Have you ever tried to invent something? As a child, Nikola Tesla saw a picture of a waterfall and imagined an invention that would turn the water’s energy into electricity. Later, he invented the water wheel, which turned water power into usable energy. As a young adult, Tesla spent his spare time experimenting with electrical equipment. He worked for inventor Thomas Edison, improving power plants and machines that ran on direct current electricity. But Tesla believed electrical distribution could be better. He went on to invent alternating current electricity, which would allow people to distribute electricity over long distances. Learn how Tesla’s work eventually made turning on electrical devices as easy as flipping a switch!