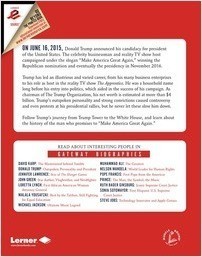 On June 16, 2015, Donald Trump announced his candidacy for president of the United States. The celebrity businessman and reality TV show host went on to win the presidency in 2016. Trump has led a varied career, from his many business enterprises to his role as host in the reality TV show The Apprentice. As chairman of The Trump Organization, his net worth is estimated at more than $4 billion. Trump’s outspoken personality caused controversy and even protests at his presidential rallies, but he never let them slow him down. Follow Trump’s journey from Trump Tower to the White House, and learn about the history of the man who promises to “Make America Great Again.”

“Knowing a president’s past is important, and this is an honest account.”—Booklist