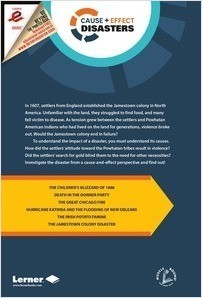 From the Series Cause-and-Effect Disasters

In 1607, settlers from England established the Jamestown colony in North America. Unfamiliar with the land, they struggled to find food, and many fell victim to disease. As tension grew between the settlers and Powhatan American Indians who had lived on the land for generations, violence broke out. Would the Jamestown colony end in failure?

To understand the impact of a disaster, you must understand its causes. How did the settlers’ attitude toward the Powhatan tribes result in violence? Did the settlers’ search for gold blind them to the need for other necessities? Investigate the disaster from a cause-and-effect perspective and find out!

“[W]ithout being too gratuitous, gory, or sensational . . . [this series] will help students understand the impact of each disaster on history. . . . A strong choice for pleasure reading and report writing.”—School Library Journal, Series Made Simple

Provide readers with a deeper understanding of history through a cause-and-effect analysis of well-known disasters. What decisions were made, what shortcuts were taken, or what heroic acts led to the ultimate outcomes? Even the most reluctant readers won’t be able to resist… View available downloads →