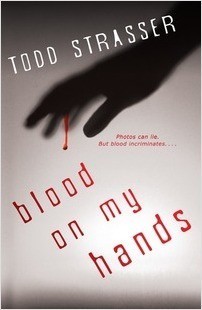 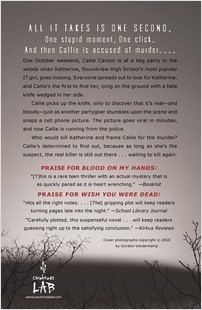 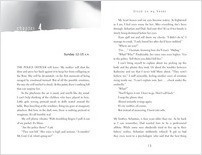 Blood on My Hands

All it takes is one second. One stupid move. One click of a cell phone.

When Callie discovers Katherine sprawled on the ground, she bends down to help her. It’s only natural—the party’s been a bit wild. And it’s only natural for her to pull out the fake knife, irritated at one more example of Katherine’s callous disregard of other people’s feelings. But the knife is real . . . and bloody. And then Callie hears the click of one cell phone, followed by another, and another. In minutes, images of her holding the bloody knife have gone viral.

Now wanted for murder, Callie is on the run from the police. All the evidence points to her guilt, but she’s determined to prove her innocence, which means . . . the real killer is still out there.

“A great deal of dialogue, short chapters, and straightforward diction will make this a quick read for students who enjoy murder mysteries.” —VOYA

“[T]his is a rare teen thriller with an actual mystery that is as quickly paced as it is heart wrenching.” —Booklist

Todd Strasser, author of Give a Boy a Gun, Boot Camp, If I Grow Up, and the Help, I’m Trapped . . . series, has written wildly popular middle-grade and teen books of all genres. When he's not speaking at schools and conferences, he makes his home in a suburb of New York City. Todd is active in a number of sports but enjoys surfing most of all. Visit him online at www.toddstrasser.com.