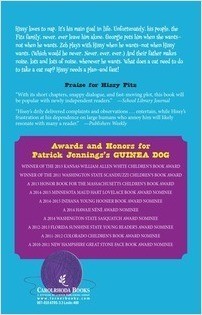 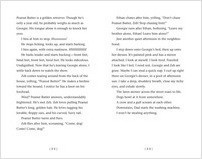 Hissy Fitz lives with some two-legged creatures who are destined to serve him in every possible way and understand his every whim. Sadly, these creatures are sorely lacking in their skills. For one thing—they touch him when they want to touch him. Don’t they know that the two-legged are there for him to touch when he wants to—meaning when he wants food? Petting wakes him up! They speak to him—don’t they know the two-legged should be seen (so Hissy knows where to demand food from) and not heard?! It’s becoming intolerable. What is this irascible cat to do?

“With its short chapters, snappy dialogue, and fast-moving plot, this book will be popular with newly independent readers.” —School Library Journal

“Hissy’s drily delivered complaints and observations…entertain, while Hissy’s frustration at his dependence on large humans who annoy him will likely resonate with many a reader. " —Publishers Weekly

Patrick Jennings's books for young readers have received honors from Publishers Weekly, The Horn Book, Smithsonian Magazine, the PEN Center USA, the Woman's National Book Association, and the Chicago and New York Public Libraries. The Seattle Public Library awarded his book, Guinea Dog, the Washington State Book Award of 2011. His book, Faith and the Electric Dogs, is currently being adapted for the screen. His newest book, Hissy Fitz, was published in January 2015. He currently writes full time in his home in Port Townsend, Washington.