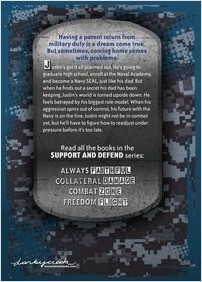 From the Series Support and Defend

Having a parent return from military duty is a dream come true. But sometimes, coming home comes with problems.

Justin’s got it all planned out. He’s going to graduate high school, enroll at the Naval Academy, and become a Navy SEAL, just like his dad. But when he finds out a secret his dad has been keeping, Justin’s world is turned upside down. He feels betrayed by his biggest role model. When his aggression spins out of control, his future with the Navy is on the line. Justin might not be in combat yet, but he’ll have to figure how to readjust under pressure before it’s too late.

“This series broaches the complex subject of teens with parents and guardians in the armed forces. . . . [H]igher-level language and mature concepts make them a good fit for late middle grade and high school readers.”—School Library Journal