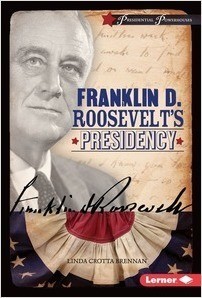 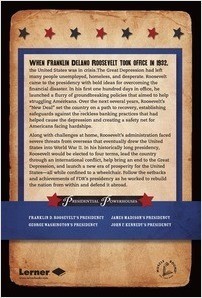 When Franklin Delano Roosevelt took office in 1932, the United States was in crisis. The Great Depression had left many people unemployed, homeless, and desperate. Roosevelt established a “New Deal,” which set the country on a path to recovery. Roosevelt’s administration also faced severe threats from overseas, eventually drawing the United States into World War II. In his historically long presidency, Roosevelt lead the country through an international conflict, help bring an end to the Great Depression, and launch a new era of prosperity for the United States—all while confined to a wheelchair. Follow the setbacks and achievements of FDR’s presidency as he worked to rebuild the nation from within and defend it abroad.

Linda Crotta Brennan is the award-winning author of more than twenty books for children including Franklin D. Roosevelt's Presidency, When Rivers Burned: The Earth Day Story, and The Black Regiment of the American Revolution. For many years, Ms. Brennan taught and worked in libraries. Now she writes full-time, her golden retriever at her feet.