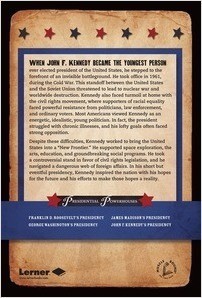 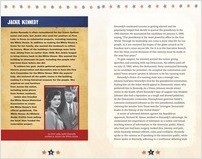 When John F. Kennedy became the youngest person ever elected president of the United States in 1961, he stepped to the forefront of an invisible battleground. The Cold War standoff between America and the Soviet Union threatened to lead to nuclear war and worldwide destruction. Kennedy also faced domestic turmoil with the civil rights movement. Despite these challenges, Kennedy worked to bring the country into a “New Frontier.” He supported space exploration, the arts, education, and groundbreaking social programs. He took a controversial stand in favor of civil rights legislation, and navigated dangerous webs of foreign affairs. Kennedy inspired the nation with his hopes for the future and his efforts to make them a reality.

“Rowell diverges from too many children’s titles that lionize the youngest-ever POTUS to offer a finely balanced biographical overview. . . . Without disputing his mythic appeal, Rowell shows JFK’s human side.’”—Booklist