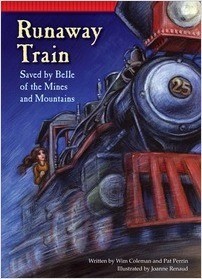 Saved by Belle of the Mines and Mountains

Lonely and bored with rural life in 1856, young Bella Lee Dunkinson began to hang around the local railroad. Engineer John Hardiman took a liking to the spirited girl and gave her a boy’s responsibilities helping with the engine. One stormy night, the engine was slipping dangerously on wet rails. While John was putting sand on the tracks, Bella found herself alone in the cab driving the train up a steep and dangerous mountainside—a 16-year-old female faced with a task that would terrify any seasoned male engineer. After her heroic and triumphant climb to the mountaintop, she was hailed by the miners who met her there as the “Belle of the Mines and Mountains.”

“[T]hese engaging and creative offerings succeed, introducing important people, events, and inventions in a lively, dramatic way….Recommended for history curricula, as well as for both school and public libraries.”―School Library Journal

Joanne Renaud graduated from Art Center College of Design in California. She studied graphic design at Central Washington University and art at the University of Ulster in Belfast, Northern Ireland. She lives in Los Angeles.