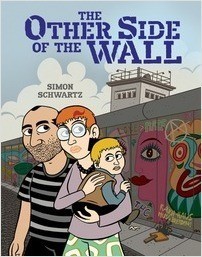 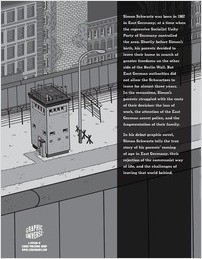 The Other Side of the Wall

Simon Schwartz was born in 1982 in East Germany, at a time when the repressive Socialist Unity Party of Germany controlled the area. Shortly before Simon’s birth, his parents decided to leave their home in search of greater freedoms on the other side of the Berlin Wall. But East German authorities did not allow the Schwartzes to leave for almost three years. In the meantime, Simon’s parents struggled with the costs of their decision: the loss of work, the attention of the East German secret police, and the fragmentation of their family.

In his debut graphic novel, Simon Schwartz tells the true story of his parents’ coming of age in East Germany, their rejection of the communist way of life, and the challenges of leaving that world behind.

“Depicted in black and white with a realistic style that portrays a grim history without being overly stark, this graphic novel shares an important view of recent history…. A good addition to school and public libraries looking to add diversity to their teen or secondary education graphic novel collections.” —School Library Journal

Simon Schwartz grew up in Berlin, Germany. He is a freelance illustrator and illustration professor in Hamburg, Germany.