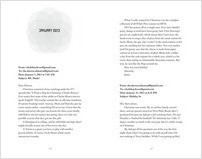 “It appears to be the only individual emitting a call at this frequency and hence, has been described as the world’s loneliest whale.”—Wikipedia

So here’s how it all starts: James, a high school freshman, is worried that the young humpback whale he tracks online has separated from its pod. So naturally he emails Darren, the twentysomething would-be filmmaker who volunteered in James’s special education program back in middle school. Of course, Darren is useless on the subject of whales, but he’s got nothing but time, given that the only girl he could ever love dumped him. And fetching lattes for his boss has him close to walking out on his movie dream and boomeranging right back to his childhood bedroom.

So why not reply to a random email from Whale Boy?

See, it turns out that the thing that binds people together most is their fear that nothing binds them together at all.

“Read this book because it’s funny and suspenseful and because you will recognize lots of people you know and even yourself in its pages. But read it most of all to remember that at some point in our lives, we are all like lost whales and the only thing that will save us are true friends.” —Francisco X. Stork, author of Marcelo in the Real World

Natalie Tilghman holds an MFA in Creative Writing from the Rainier Writers Workshop. She lives in Glenview, Illinois, with her husband, two sons, and their Chihuahua.

Bill Sommer holds an MFA in Creative Writing from the Rainier Writers Workshop and a bachelor's in jazz performance from the University of Miami. Born and raised in St. Louis, he now lives in Atlanta.