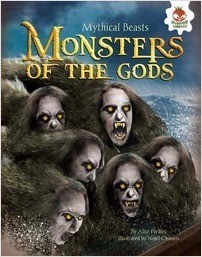 Monsters of the Gods

In ancient mythologies, many of the gods created all-powerful predators that unleashed panic on the human world. These horrors could be either beast or human—or even both. But who would come out on top in a fight? Which one is the most powerful of all?

Meet the ten weirdest, strongest, and nastiest of these mythical beasts, including:

● Charybdis, who swallowed ships in one easy gulp
● Ammut, devourer of the dead
● the elephant-snake Grootslang
● the nine-headed Hydra

Find out about each monster’s features and skills, where in the world they come from, how they rank compared to one another, and how you might defeat them if you ever strayed into their remote realms.