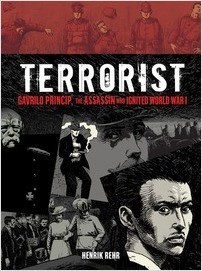 Gavrilo Princip, the Assassin Who Ignited World War I

“I am not a criminal, because I destroyed that which was evil. I think that I’m good.”—Gavrilo Princip, October 23, 1914.

This much we know: On June 28, 1914, a young man stood on a street corner in Sarajevo, aimed a pistol into a stalled car carrying Archduke Franz Ferdinand of Austria, and pulled the trigger. Within a few minutes, the archduke was dead, and Europe would not know peace again for five years. More than 16 million people would die in the fighting that came to be known as World War I.

Little else is known about the young man named Gavrilo Princip. How could a poor student from a tiny Serbian village turn the wheel of history and alter the face of a continent for generations? Henrik Rehr’s dark and riveting graphic novel fills the gaps in the historical record and imagines in insightful detail the events that led a boy from Obljaj to become one of history’s most significant terrorist.

“[F]or teen readers who appreciate some intellectual heft in their GNs. Even young adults who skim past the kitchen table and coffeehouse political discussions, however, will be drawn in.”—The Bulletin of the Center for Children’s Books

“…[B]rings a wealth of detail to bolster contemporary understanding of the Great War….[T]his would make a good choice for both casual reading for history buffs as well as curriculum support.”―Booklist

“[Rehr] succeeds brilliantly, following Serbian nationalist Gavrilo Princip’s long journey toward the assassination of Archduke Ferdinand with penetrating sensitivity, without glorifying his deed….[A] work of power and force, one that will stay with readers long after they finish it.”―starred, Publishers Weekly

“This narrative is not only informative but intriguing and ultimately harrowing….[A]n excellent contribution to World War I history collections.”—School Library Journal

Henrik Rehr has been a cartoonist for more than thirty years. He was born in Denmark and lives with his family in New York City.