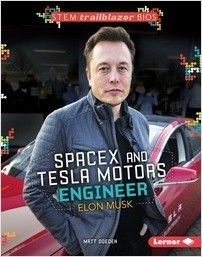 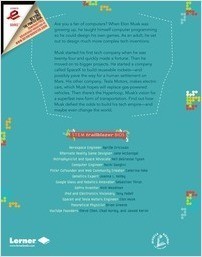 Are you a fan of computers? When Elon Musk was growing up, he taught himself computer programming so he could design his own games. As an adult, he set out to design much more complex tech inventions.

Musk started his first tech company when he was twenty-four and quickly made a fortune. Then he moved on to bigger projects. He started a company called SpaceX to build reusable rockets—and possibly pave the way for a human settlement on Mars. His other company, Tesla Motors, makes electric cars, which Musk hopes will replace gas-powered vehicles. Then there’s the Hyperloop, Musk’s vision for a superfast new form of transportation. Find out how Musk defied the odds to build his tech empire—and maybe even change the world.