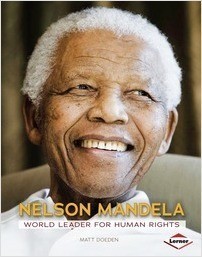 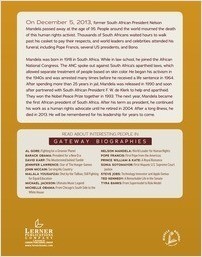 On December 5, 2013, former South African President Nelson Mandela passed away at the age of 95. People around the world mourned the death of this human rights activist. Thousands of South Africans waited hours to walk past his casket to pay their respects, and world leaders and celebrities attended his funeral, including Pope Francis, several US presidents, and Bono.

Mandela was born in 1918 in South Africa. While in law school, he joined the African National Congress. The ANC spoke out against South Africa’s apartheid laws, which allowed separate treatment of people based on skin color. He began his activism in the 1940s and was arrested many times before he received a life sentence in 1964. After spending more than 25 years in jail, Mandela was released in 1990 and soon after partnered with South African President F. W. de Klerk to help end apartheid. They won the Nobel Peace Prize together in 1993. The next year, Mandela became the first African president of South Africa. After his term as president, he continued his work as a human rights advocate until he retired in 2004. After a long illness, he died in 2013. He will be remembered for his leadership for years to come.

“Doeden offers a balanced view, noting both criticisms against Mandela… and the legacy of a better country he left after his death. An informative and inspirational read for biography, character education, and world history studies.” —Booklist