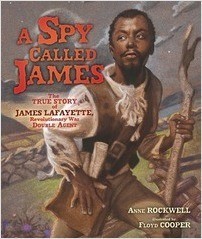 Told for the first time in picture book form is the true story of James Lafayette—an enslaved person who spied for George Washington’s army during the American Revolution.

After his resounding defeat at the battle of Yorktown, British general Charles Cornwallis made a point of touring the American camp, looking for the reason behind his loss. What he didn’t expect to see was James, an escaped enslaved person who had served as a guide to the British army. Or at least that’s what Cornwallis was led to believe. In fact, James wasn’t actually a runaway—he was a spy for the American army.

But while America celebrated its newfound freedom, James returned to slavery in Virginia. His service as a spy hadn’t qualified him for the release he’d been hoping for. For James the fight wasn’t over; his next adversary was the Virginia General Assembly. He’d already helped his country gain its freedom, now it was time to win his own.

“With a compelling story and appealing artwork, this inviting foray into American history will catch the attention of many readers.”—Booklist

“[Rockwell] delivers a striking portrait of James Lafayette, an African-American spy critical to the outcome of the Revolutionary War. [Cooper’s] illustrations affirm his skill as a gifted portrait artist.”—Publishers Weekly

Anne Rockwell is the author of Hey, Charleston!:The True Story of the Jenkins Orphanage Band, which was a Junior Library Guild Selection. She lives in Stamford, Connecticut.

Floyd Cooper (1956-2021) was a Coretta Scott King Award winner and illustrator of numerous books for children including Ruth and the Green Book, A Spy Called James, and Max and the Tag-Along Moon. Unspeakable, one of his final picture books, was a National Book Award longlist title, a Sibert Honor book, and a Caldecott Honor book. He received a degree in fine arts from the University of Oklahoma and went on to develop a distinctive art technique called oil erasure.