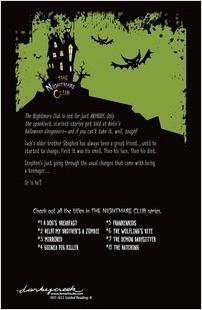 Help! My Brother's a Zombie

From the Series The Nightmare Club

The Nightmare Club is not for just ANYBODY. Only the spookiest, scariest stories get told at Annie’s Halloween sleepovers―and if you can’t take it, well, tough!

Jack’s older brother Stephen has always been a great friend…until he started to change. First it was his smell. Then his face. Then his diet.

“Delightfully macabre stories, which are fast-paced and just silly enough to ward off actual nightmares.”―Booklist

“[T]he lightly spooky nature of the selections combined with the brevity of the text and inclusion of illustrations makes this series a good choice for younger readers.” —School Library Journal

Annie Graves is twelve years old and has no intention of growing up. She lives at an undisclosed address in Dublin with her pet toad, Much Misunderstood, and a small black kitten, Hugh Shalby Nameless.

Glenn McElhinney is an illustrator from Ireland.