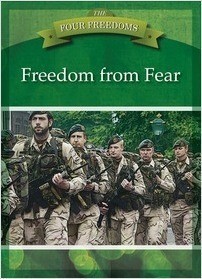 From the Series The Four Freedoms

When World War II broke out in Europe, it was the beginning of a race to build bombs and war machines. Following the war, a new “arms race” began between the U.S. and the Soviet Union. Today, nations continue to build dangerous weapons. Read why the freedom from fear is still important more than 70 years after President Franklin Roosevelt spoke of it. And learn about ways people are working to eliminate the arms of war and ensure freedom from fear around the world. Book features: Table of Contents; Glossary; Additional Resources including books, web sites, interactive sites, and source notes; Index; Photos and captions.

Bryon Cahill has been writing for young people for over a decade. As editor of Weekly Reader's READ magazine, Bryon wrote short fiction, nonfiction, and reader's theater plays, created award-winning literary web sites, and spearheaded an experimental theater adaptation of William Shakespeare's Much Ado About Nothing live on Facebook. In 2012, Bryon launched Literary Wonderland (www.literarywonderland.com). An avid reader, he also enjoys running and playing tennis at home in Morristown, New Jersey.

In 1941, on the eve of the nation’s entry into World War II, President Franklin D. Roosevelt spoke to Congress and the world. In the speech, he outlined four universal freedoms that people around the world deserved. The Four Freedoms shows why these freedoms were important to fight View available downloads →