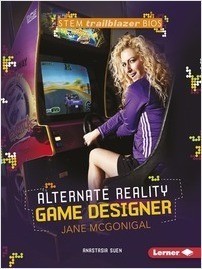 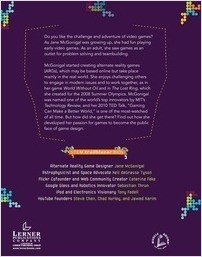 Do you like the challenge and adventure of video games? As Jane McGonigal was growing up, she had fun playing early video games. As an adult, she saw games as an outlet for problem solving and teambuilding.

McGonigal started creating alternate reality games (ARGs), which may be based online but take place mainly in the real world. She enjoys challenging others to engage in modern issues and to work together, as in her game World Without Oil and in The Lost Ring, which she created for the 2008 Summer Olympics. McGonigal was named one of the world’s top innovators by MIT’s Technology Review, and her 2010 TED Talk, “Gaming Can Make a Better World,” is one of the most-watched of all time. But how did she get there? Find out how she developed her passion for games to become the public face of game design.

“What makes this series exceptional is the easy-to-read text, the easy-to-understand language, and the photographs sprinkled throughout…. The series would be a relevant and welcome addition to the school library.” —Library Media Connection

“These short books, written in a simple and straightforward style, will appeal most to middle school-aged readers and should find equal popularity among both males and females.” —VOYA