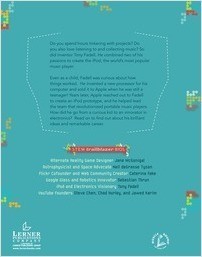 Do you spend hours tinkering with projects? Do you also love listening to and collecting music? So did inventor Tony Fadell. He combined two of his passions to create the iPod, the world’s most popular music player.

Even as a child, Fadell was curious about how things worked. He invented a new processor for his computer and sold it to Apple when he was still a teenager! Years later, Apple reached out to Fadell to create an iPod prototype, and he helped lead the team that revolutionized portable music players. How did he go from a curious kid to an innovator in electronics? Read on to find out about his brilliant ideas and remarkable career.