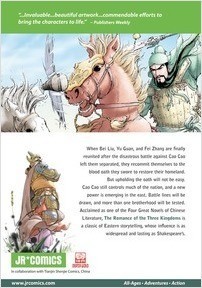 When Bei Liu, Yu Guan, and Fei Zhang are finally reunited after the disastrous battle against Cao Cao left them separated, they recommit themselves to the blood oath they swore to restore their homeland. But upholding the oath will not be easy. Cao Cao still controls much of the nation, and a new power is emerging in the east. Battle lines will be drawn, and more than one brotherhood will be tested.