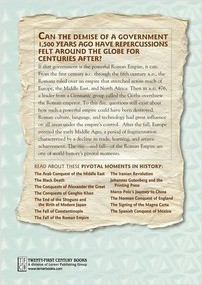 The Fall of the Roman Empire, 2nd Edition

Can the demise of a government 1,500 years ago have repercussions felt around the globe centuries later? If that government is the powerful Roman Empire, it can. From first century B.C. through fifth century A.D., the Romans ruled over an empire that stretched across much of Europe, the Middle East, and North Africa. Then in 476, a leader from a Germanic group called the Goths overthrew the Roman Emperor. To this day, questions still exist about how such a powerful empire could have been destroyed. Roman culture, language, and technology had great influence on all areas under the empire’s control. After the fall, Europe entered the early Middle Ages, a period of fragmentation characterized by a decline in trade, learning, and artistic achievement. The rise—and fall—of the Roman Empire are one of world history’s most pivotal moments.