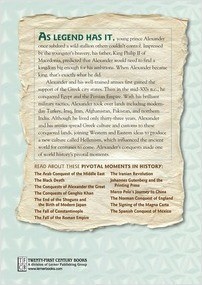 The Conquests of Alexander the Great, 2nd Edition

As legend has it, a young prince, Alexander, once subdued a wild stallion others couldn’t control. Impressed by the youngster’s bravery, his father, King Philip of Macedonia, predicted that Alexander would need to find a kingdom big enough for his ambitions. And when Alexander became king, that’s exactly what he did. Alexander and his well-trained armies first gained the support of the Greek city states. Then in the mid-300s B.C., he conquered Egypt and the Persian Empire. With his brilliant military tactics, Alexander took over lands including modern-day Turkey, Iraq, Iran, Afghanistan, Pakistan, and northern India. Although he lived only thirty-three years, Alexander and his armies spread Greek culture and customs to these conquered lands, joining Western and Eastern ideas to produce a new culture called Hellenism, which influenced the ancient world for centuries to come.