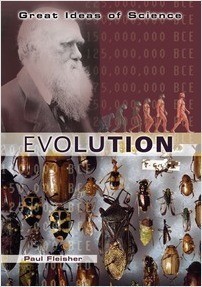 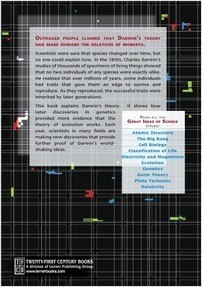 Outraged people claimed that Darwin’s theory had made humans the relatives of monkeys. Scientists were sure that species changed over time, but no one could explain how. In the 1800s, Charles Darwin’s studies of thousands of specimens of living things showed that no two individuals of any species were exactly alike. He realized that over millions of years, some individuals had traits that gave them an edge to survive and reproduce. As they reproduced, the successful traits were inherited by later generations.

This book explains Darwin’s theory. It shows how later discoveries in genetics provided more evidence that the theory of evolution works. Each year, scientists in many fields are making new discoveries that provide further proof of Darwin’s world-shaking ideas.

Paul Fleisher has spent his working life as an educator and writer. His books for young people cover a variety of science, ecology and natural history subjects. He has also written several widely-used classroom activity books on thinking games, social activism, and creative writing. Paul currently works as an adjunct professor in the school of education at Virginia Commonwealth University, as well as assistant to the director of the Richmond Peace Education Center. He also teaches classes in writing at the University of Richmond. Prior to taking early retirement in 2005, he taught gifted elementary and middle school students in the Richmond, Virginia Public Schools for almost 30 years. During that time, he helped develop numerous interdisciplinary instructional units on topics including Humor, Justice, Engineering and Design and The Art and Science of Music. Paul was in the vanguard of teaching educational technology in Richmond Public Schools, teaching computer programming and web design to his students. He has offered workshops on team-building, thinking games, teaching writing, and other topics at educational conferences for many years. Paul remains an activist for peace and social justice. He currently serves on the boards of the Virginia Forum and the Virginia Museum of Natural History. He has also served terms on the Virginia Education Association's Fitz Turner Commission for Human and Civil Rights, and the Virginia Chapter of the ACLU. In 1988 Paul received the Virginia Education Association Award for Peace and International Relations and in 1999 he was awarded the Thomas Jefferson Medal for Outstanding Contributions to Natural Science Education. It is Paul's great good fortune to be married to educator Debra Sims Fleisher, who has taught him much of what he knows about working in a classroom, as well as how to live as a more decent human being. In his spare time Paul is an avid gardener, cook, and reader.