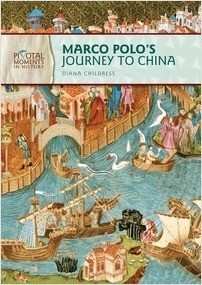 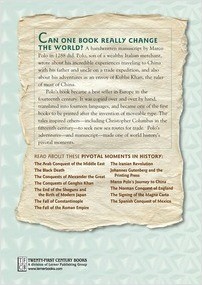 Can one book really change the world? A handwritten manuscript by Marco Polo in 1288 did. Polo, son of a wealthy Italian merchant, wrote about his incredible experiences traveling to China with his father and uncle on a trade expedition, and also about his adventures as an envoy of Kublai Khan, the ruler of most of China. Polo’s book became a bestseller in Europe in the fourteenth century. It was copied over and over by hand, translated into fourteen languages, and became one of the first books to be printed after the invention of moveable type. The tales inspired others—including Christopher Columbus in the fifteenth century—to seek new sea routes for trade. Polo’s adventures—and manuscript—are one of world history’s most pivotal moments.