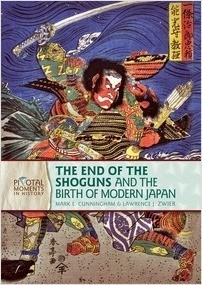 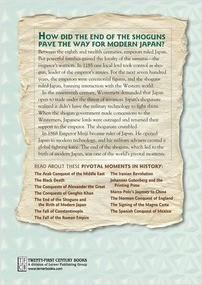 The End of the Shoguns and the Birth of Modern Japan, 2nd Edition

How did the end of the shoguns pave the way for modern Japan? Between the eighth and twelfth centuries, emperors ruled Japan. But powerful families gained the loyalty of the samurai – the emperors’ warriors. In 1185 one local lord took control as shogun, leader of the samurai armies. For the next seven hundred years, the emperors were ceremonial figures, and the shoguns ruled Japan, banning interaction with the Western world. In the nineteenth century, Westerners demanded that Japan open to trade under the threat of invasion. Japan’s shogunate realized it didn’t have the military technology to fight them. When the shogun government made concessions to the Westerners, Japanese lords were outraged and returned their support to the emperor. The shogunate crumbled. In 1868 Emperor Meiji became ruler of Japan. He opened Japan to modern technology, and his military advisers created a global fighting force. The end of the shoguns, which led to the birth of modern Japan, was one of the world’s pivotal moments.