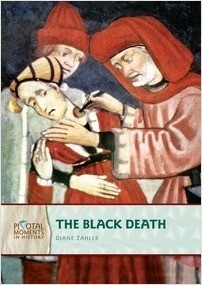 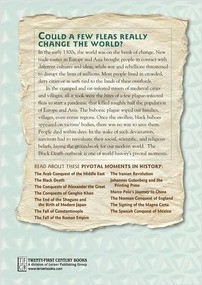 Could a few fleas really change the world? In the early 1300s, the world was on the brink of change. New trade routes in Europe and Asia brought people in contact with different cultures and ideas, while war and rebellions threatened to disrupt the lives of millions. Most people lived in crowded cities or as serfs tied to the lands of their overlords. Conditions were filthy, as most people drank water from the same sources they used for washing and for human waste. In the cramped and rat-infested streets of medieval cities and villages, all it took were the bites of a few plague-infected fleas to start a pandemic that killed roughly half the population of Europe and Asia. The bubonic plague wiped out families, villages, even entire regions. Once the swollen, black buboes appeared on victims’ bodies, there was no way to save them. People died within days. In the wake of such devastation, survivors had to reevaluate their social, scientific, and religious beliefs, laying the groundwork for our modern world. The Black Death outbreak is one of world history’s pivotal moments.

Diane Zahler is the author of two nonfiction books for high-school students, The Black Death and Than Shwe's Burma, both published by Lerner Publishing Group. She lives with her husband and dog in New York's Harlem Valley.