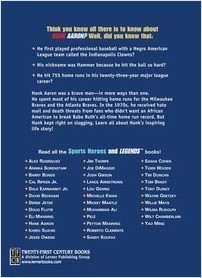 Born in 1934, Hank Aaron faced many roadblocks because of his race. In fact, his school did not even have a baseball team. When Jackie Robinson broke the race barrier and entered the major leagues, Aaron was given hope that his dream of playing professional baseball could someday come true. Aaron became one of baseball’s best players—winning the World Championship, breaking Babe Ruth’s home run record, and being inducted into the Baseball Hall of Fame.