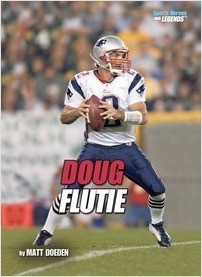 Think you know all there is to know about Doug Flutie? Well, did you know that:● He played football in three different professional leagues?● He made the first NFL dropkick play in sixty-four years?● He plays in a rock-and-roll band?Most people said that Boston College quarterback Doug Flutie was too small to play professional football. But Flutie proved the critics wrong during his twenty-year career in the professional leagues. He joined the United States Football League’s New Jersey Generals right after college, but the league folded at the end of Flutie’s first year. In the Canadian Football League, he led his teams to three championships. In the National Football League, he surprised everyone with a string of stellar seasons for teams including the Buffalo Bills and the New England Patriots. Find out how this unlikely hero became a champion.