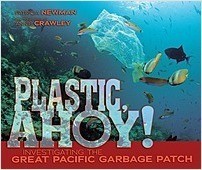 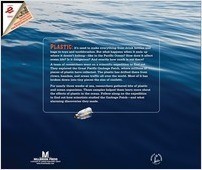 Plastic: it’s used to make everything from drink bottles and bags to toys and toothbrushes. But what happens when it ends up where it doesn’t belong—like in the Pacific Ocean? How does it affect ocean life? Is it dangerous? And exactly how much is out there?

A team of researchers went on a scientific expedition to find out. They explored the Great Pacific Garbage Patch, where millions of pieces of plastic have collected. The plastic has drifted there from rivers, beaches, and ocean traffic all over the world. Most of it has broken down into tiny pieces the size of confetti.

For nearly three weeks at sea, researchers gathered bits of plastic and ocean organisms. These samples helped them learn more about the effects of plastic in the ocean. Follow along on the expedition to find out how scientists studied the Garbage Patch—and what alarming discoveries they made.

Americans generated a staggering 251 million tons of trash in 2012, according to the Environmental Protection Agency, with plastic waste alone accounting for 32 million tons of that total.
A new book, Plastic, Ahoy! Investigating the Great Pacific Garbage Patch, examines what happens when tons of plastic and other debris make its way to the ocean to become part of the Great Pacific Garbage Patch. Author Patricia Newman spent three weeks at sea with Scripps Institution marine biologists and researchers exploring the effects of the plastic and other trash on marine life.

Plastic, Ahoy! follows Miriam Goldstein, Chelsea Rochman and Darcy Taniguchi — ­all members of the 2009 Scripps ­Environmental Accumulation of Plastic Expedition — aboard the research vessel as they run tests on water and plastic samples to determine the impact of this pollution on the region. Photographer Annie Crawley captures images of the garbage patch — which is the result of pollution from shores, rivers and oceans — in this eye-opening book.

“Newman does a solid job of walking readers through the trio of studies in an orderly fashion, and plenty of color photographs convey a sense of ship life for readers more drawn to the adventure than the science.” —The Bulletin of the Center for Children’s Books

“The balance between text, graphics, and photographs is ideal. . . . Recommended for all general collections needing an attractive and informative look at the environmental effect of plastics that encourages young readers to take meaningful and doable action.” —School Library Journal

“An engaging and worthwhile read, this will surely make young readers think twice about their trash.” —Booklist

Annie Crawley, aka Ocean Annie, travels and works around the world. Trained as a photo and broadcast journalist, her work has been broadcast and published worldwide. From Indonesia to Galapagos, Belize to Papua New Guinea, India to Australia, Annie has explored and documented life on our planet. Based in Seattle, Annie works as a producer, writer, photographer, and motivational speaker. She founded Dive Into Your Imagination, a multimedia company producing books, enhanced eBooks, educator guides, films, motivational art, and more. Annie was the photographer and filmmaker aboard SEAPLEX sponsored by Project Kaisei and Samy's Camera. Annie specializes in the underwater realm and also works as a photo, video, and scuba diving instructor. She is a member of the Women Divers Hall of Fame and created a dive team for kids and teens. Visit her online at www.AnnieCrawley.com and www.anniecrawleyphotography.com.

Plastic: it’s used to make everything from drink bottles and bags to toys and toothbrushes. But what happens when it ends up where it doesn’t belong—like in the Pacific Ocean? How does it affect ocean life? Is it dangerous? And exactly how much is out there? A… View available downloads →