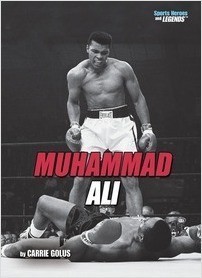 A stolen bicycle led twelve-year-old Cassius Clay to his first boxing teacher. He spent endless hours training, determined that he would one day become the heavyweight champion of the world. In 1964 he beat Sonny Liston to make his prediction come true. When Ali refused to fight in the Vietnam War, his title was stripped from him, and he was banned from boxing. But just a few years later, he made an incredible comeback. Find out how Ali became one of the most popular athletes in the world.